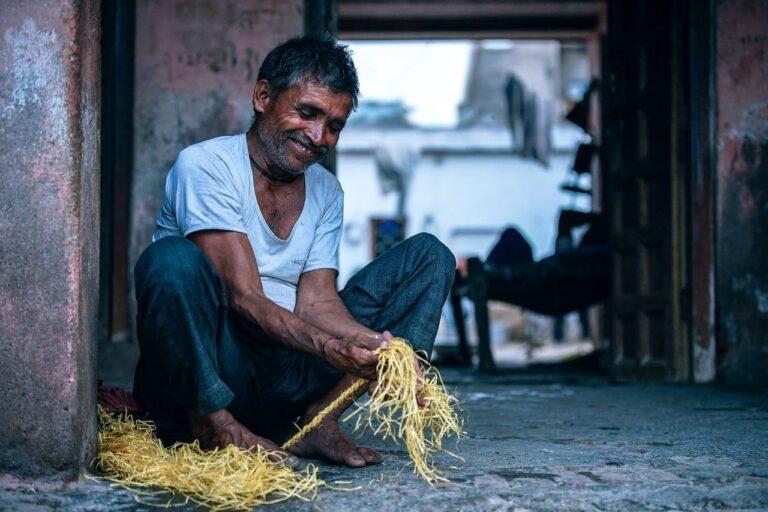 Just 50 liters of water per day!  What if I told you that’s all you get from tomorrow to brush your teeth, take a bath, wash your clothes & utensils, flush your shit off and cook your food? Most of you would take it as a joke because luckily, you can.

Unfortunately, the natives of Cape Town aren’t that lucky. For that’s all they have now. Just two buckets of water a day! Strange, no?

On the other hand, the of India uses 1,572,500,000 liters of water every day, which becomes unfit for further human use. But wait!

Eating up of such valuable resources by clothing industry is not my main concern here. In fact, its just a speck of dust on the heap of garbage when I look into the bigger problems of today’s fashion. As ‘The Guardian’ once pointed out, “It is the biggest environmental problem you have never heard of”.

Collectively, fashion industry can be considered a moat that surrounds the castle and secures the villain (synthetic textile) within. The reason I’m writing this blog is to sensitize the reader about the hidden threat of “synthetic fiber” and invoke urgency to shift back to “natural fiber”. And trust me, It’s a hard nut to crack! To convince people to alter their comfort level today for a livable tomorrow.

“1 garbage truck of clothes is burned or dumped in landfills, every second.”

The pleasure of acquiring is so enormous. A research suggests that, on an average, women end up restricting their daily use to merely 20% of their wardrobe in a given year. So the rest of 80% sits unused, right there in your closet, comfortably. But its production and processing must have not been so comfortable for the environment. Thanks to the fast fashion!

Appearance, feel, comfort and the price tag! That’s all I cared about before getting into the dirty work of finding answers to such questions. Why are women working in acrylic factory, 7 times more likely to develop Breast Cancer than a random girl who’s fortunate enough to not be working there? Why environmentalists have long been warning to boycott “Synthetic fibers”?

By now, numerous studies have confirmed the presence of around 2000 chemicals in a typical polyester T-shirt. These chemicals include toxins, carcinogens, and hormone disruptors which mix with sweat and seep into our skin pores very easily. Direct or indirect exposure to these chemicals has been proved to cause respiratory ailments, infertility, dermatitis and even cancer in some cases. It affects us more directly than we could ever imagine. But how?

The problem starts with the identification, itself! It’s easier to identify wolves as they are. But it’d be difficult to identify a wolf in sheep’s clothing.

Likewise, it’s easy to blame the gigantic ships and airplanes for the environmental pollution and damage. In the hindsight, we often fail to realize that clothing industry sucks up more energy than both aviation and shipping combined. In fact, it stands to be the 2nd largest industrial polluter worldwide.

Think twice before washing that polyester T-shirt. Its one wash can murder 1900 larvae fishes. Scholars weren’t kidding when they revealed around 1900 microfibers get washed down in each wash of a typical synthetic cloth. Another research concluded that a single thread of such microfiber is enough to kill a baby fish. As I dug deeper into what goes behind the flashy and lustrous clothing of my closet, I was guilt-ridden.

Soon I realized that the threat of “synthetic fiber” is real. It’s more of an issue to be acted upon and less of a story to believe in or not. And the solution is simple. To shift back to the natural fibers.

HOW DOES IT AFFECT YOU ?

Only 15% of what we worry convert into actual problems. While the rest of our problems keep coming from somewhere else. Things we don’t care to worry about.

So a quick takeaway from here would be to not worry much. If still obsessed, worry about something that calls for worrying. Which brings me back to the problem here. A small problem which may turn big if we ignore it- synthetic textile.

Synthetic textile is majorly made from petrochemicals. It’s treated with over 2000 toxic chemicals which are poisonous for the factory workers and the end-users, alike. Today, synthetic clothing covers 70% of the worldwide clothing in the form of Nylon, Polyester, Acrylic, Spandex, Rayon, etc. Among these, “polyester” is leading the industry with almost 60% share in total clothing, worldwide.

The problem with the synthetic textile is serious and extensive.

I call it serious because some of the chemicals used in the producing synthetic fiber are closely linked to the hormonal disruption, miscarriages, formation of cancer cells and carcinogens (Cancer inducing substance) . I call it extensive because its impact is everywhere. It suffocates its makers, attack its users and finally kills its digesters. Equally badly.

The production of synthetic fiber begins from the extraction of oil & petroleum. This strenuous task degrades the environment & depletes the scarce stock of fossil fuels further. To gain perspective, 1 barrel of oil is enough to drive you 2300 KMS. And 3,300,000,000 barrels of oil is used to suffice the worldwide demand of synthetic fiber. Even more so, production of a single polyester T-shirt emits- nitrous oxides (NO2) which is 300 times more toxic than CO2.

The process of turning petroleum into your wrinkle-free & flashy piece of clothing, sounds like magic. But what goes behind the scene is more tragic!

The processing of nylon, cotton, hemp, wool or polyester generally consumes equal energy per meter of cloth. So, don’t be fooled by anyone who makes false claims just to demonize synthetics on energy consumption. But it’d be a grievous mistake to overlook the “nature of processing” a synthetic fiber demands. It’s involves noxious chemicals, which are known to cause major chronic diseases to factory-users and product users alike.

The problem with its use can only be understood if one realizes this. “What goes on the skin also goes in the body”. Studies have proved that Carcinogens ttrapped in synthetic clothing can easily seep into our bodies through skin pores. Not surprisingly, every 6th death in world today is due to Cancer. And every 5th cancer case is going to be a Skin Cancer, soon.

Sometimes, getting rid of a problem “mindlessly” gives birth to bigger problems.

That’s what happens when we discard synthetic textiles. Even after huge technology leaps, there’s no plausible concept of discarding our clothes safely. Eventually, they are either burned, or get dumped into the landfills. Their burning releases nitrous oxides, which is one of the most dangerous greenhouse gas. The other way is dumping into the landfills, which is even worse. When dumped, synthetics release thousands of toxins ; thereby mixing into the water bodies and finally into the food-chain, causing myriad of health issues.

90% of the synthetics you’d see in the market are Made in one of these countries : China, Indonesia , Thailand , Bangladesh and India. Ever pondered why? Most of the chemicals used to treat synthetic textiles are so toxic and lethal that they are strictly banned in major  developed countries. No marks for guessing why it is easy to use them here.

The weak labor laws, weaker legal compliances, and weakest mandate to ensure wastewater treatment. Coupled with cheap and gullible workforce. Not to mention, high unemployment rates which lures the government to trade off anything if it improves the employment statistic. For the sake of slightest surge in employment figures governments compromise overall health of its citizens and well-being of it’s flora and fauna.

SOLUTION could not be SIMPLER !

“The most sustainable piece of clothing is the one that’s already lying in your closet.”

Keeping in mind, the menace textile industry is creating there’s only one solution to it-SHOP LESS. Everything else is secondary. Rather than just buying clothes out of desire, we should buy only what we NEED. And when the need arises finally, it’d be wise to take out just 10 minutes. To think about the origin, before-life and after-life of the piece of fabric you are set to buy. It will help all of us.

While it’s admittedly tricky to shoo away all your pieces of synthetic clothing, right now. You may run out of clothes if you do so. Our purpose of spreading awareness about the threat of using synthetic fibers is to help people make wiser choices for a healthy future. For a better tomorrow.

Besides, a lot of other measures become important to adopt sustainable clothing. These include Reusing & Rotating your clothes. Donating them, if they’re lying idle for long. It’s like getting two giggles with one tickle. Helping an underprivileged and mother nature at the same time. Finally, look for the sustainable brands who are trying to take the lead and change the whole scene. This way you just don’t invest in sustainable clothes, you’re in a way investing in a better future of your children and the planet.

It’s difficult to adopt “good things”, but WHY ?

Everyone likes to talk about sustainability. Still, only few practice it. But why?

It’s still a challenge because it requires you to trade off the convenience of today for a better tomorrow, when we’ll not be here. And who does that? Only a far-sighted, compassionate, rational and conscious mind.

At the outset, boycotting synthetic fiber may be a challenge because of its dominance. Synthetic fibers are competitive because they are cheap, convenient and easily available. But, So is a plastic water bottle. Which increases the intake of plastic particles to 130,000 per year, for a person who only drank bottled water. Compared with someone who only drank tap water and consumed 4,000 particles

Their competitiveness is a challenge, of course. But there’s a bigger challenge which comes in our way to natural fibers. It is our inability to acknowledge the disastrous effect of “synthetics” on the planetary health. We need to stop seeing sustainability as a pass time of elites and hippies.

The planet wants us to live ethically, or just stop living at all. Period.

We’re hopeful to see mindful folks already plonking towards conscious & sustainable living. After being casually asked about their stance on climate issues, a whopping 70% of the millennials (in Cyber City, Gurgaon) admitted to facing eco-anxiety, subconsciously. And a hopeful 90% of them are eager to change their everyday life choices, after the mysterious pandemic of this decade.

I just flow knowledge and information. I do not believe in forcing it. Because you’re a grown up. And awakening to knowledge is not that hard. At least, for a grown up.

Globally speaking, there are two pre-requisites to get rid of synthetic fiber. First, we need policy level changes which lead people to greener fabrics. A simple example of such change would be to enforce the manufacturer to just mention the chemicals which remain trapped in clothing on the clothing label. In the short run, this is as unfeasible a measure as ambitious it may sound. I personally rely on the second pre-requisite. It’s the educated youth who are ready to behave mindfully & act responsibly. If not the producers, we the consumers should really make efforts to see how we can save our people, wildlife and the planet, just by adopting “natural fibers”.

8 Reasons why we call HEMP -“a Joy-giver, Liberator & source of Happiness”